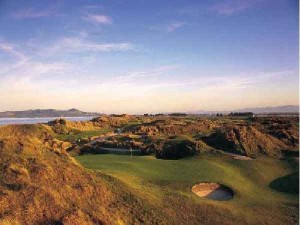 Portmarnock Golf Club was established in 1894, and is situated just North of Dublin city, in Portmarnock, Ireland. The course was laid out by William Pickeman on land owned by the distiller John Jameson, and originally consisted of just 9 holes, with another nine being added two years later.

Portmarnock was the venue for the first Irish Open in 1927, and has hosted the tournament on many occasions since, including 13 following its revival in 1975.Many other importantgolf tournaments have been held at the club, including the British Amateur Championship in 1949, the Walker Cup in 1991, and the Canada Cup in 1960.

Portmarnock is consistently ranked in the world’s top 20 courses. 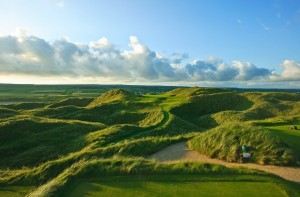 The Old Course is one of two 18-hole courses at Lahinch Golf Club. Golf at Lahinch dates back to 1892, making it one of Ireland’s oldest clubs. The Old Course is a classic seaside links layout with rolling greens and undulating fairways. The towering sand dunes that cover the landscape guarantee that golfers will encounter several blind shots. The unpredictable winds coming off the Atlantic ocean add an interesting twist to the round.

The golf course’s most famous holes are the par-5 fourth and the par-3 fifth. The fourth requires a drive to a long, narrow fairway. It is nicknamed the “Klondyke” after the treacherous hill that blocks the view for the second shot. After the tricky fourth hole, golfers are then immediately faced with an unusual par-3 that is nestled between two steep dunes and is completely blind from the tee.

Lahinch ‘Old Course’ is consistently ranked at the higher end of the worlds top 100 course. 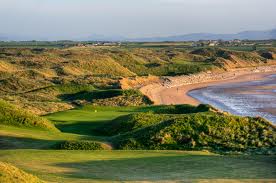 The Old Course is the original course at Ballybunion Golf Club, which is located in County Kerry on Ireland’s southwest coast. It is joined by another championship links course designed by Robert Trent Jones. The Old Course has gained a reputation as one of the best links golf courses in the world. The classic links land terrain is covered with rolling sandhill’s and grassy dunes.The challenging layout features narrow, contoured fairways that feel as though they are tunneled through the dunes.

The golf course begins gently but by the seventh hole, it is clear why it is ranked as one of the best in the world. Golfers at Ballybunion should be prepared for a formidable test of their shot-making, placement, and trajectory control skills. The already beautiful landscape is further enhanced by the stunning views of the Atlantic Ocean. 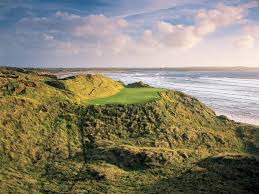 Course Map: Click here for a hole by hole video tour of the course.

Doonbeg Golf Club has a diverse landscape that sprawls from a crescent-shaped beach covered in centuries-old sand dunes inland towards verdant rolling hills. Two times British Open Champion Greg Norman, the course’s designer, was immediately aware of the enormous potential available. The rugged terrain practically made the course itself. Fourteen of the greens and twelve of the fairways required no changes at all, just a simple mowing of the grass.

Routed along the existing 100-foot dunes, the layout is a simple loop of nine holes out and nine holes back, but the speed and direction of the wind make the course uniquely challenging every time you play. The towering fescue rough throughout is nearly impenetrable but they are nicely balanced by the wide fairways. There are also different bunker varieties used, including Scottish-style pot bunkers.

Doonbeg is regarded as one of Ireland premier modern links courses. 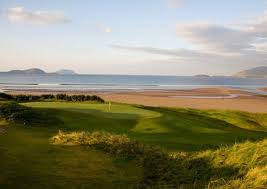 The historic Waterville Golf Links overlooks the Atlantic from its location along the Ring of Kerry. The 40-acre estate includes the 18th-century manor house and a renowned championship links course. Golf on the club’s sand dune-covered landscape dates back to 1889. Gorse and native grasses blanket the golf course, coming into play along the firm fairways. Treacherous sod-faced bunkers are strategically placed throughout the course, they present some of the layout’s biggest challenges.

Golfers should forget the lob wedge and opt for a bump-and-run approach combined with creative shot-making. In addition to the golf course, Waterville is known for being a fishing destination. The waters off of its coast are home to Ireland’s most famous sea trout and salmon fishery.

Regular visitors include British Open Champions Mark O’Meara, David Duval, Tiger Woods and of coarse the legendary Payne Stewart used to visit to practice for the Open and take in a spot of fishing!

Waterville consistently features in the top half of the worlds top 100 course.

Tralee Golf Club has the distinction of being Arnold Palmer’s first European course design. Located on Ireland’s southwestern coast, there are beautiful ocean views from every hole on the golf course. Palmer immediately recognized the landscape’s enormous potential, saying that he has “never come across a piece of land so ideally suited for the building of a golf course.”

The layout features undulating fairways lined with treacherous rough and hard greens covered in fescue. Palmer used a heavier hand designing the front nine but the more challenging back nine was truly sculpted from nature. Tralee’s homeward stretch includes what is arguably the most difficult hole on the course, and maybe even the most difficult in Ireland. The 12th hole is a long downhill par-4 that features heavy rough on the right demanding accuracy off of the tee, combined with a daunting approach shot to a green that sits above the fairway with a 60ft drop off if you miss short or left!!

Tralee is a truly spectacular golf course and is sure to feature among the worlds top courses very soon. 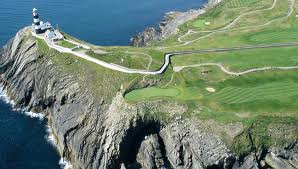 Old Head occupies a 220-acre headland site that juts out over two miles into the Atlantic. The course’s name refers to the Old Head of Kinsale, which is a national monument and ancient royal site that sits at the narrowest part of the promontory. The location was a stronghold for the first Irish settlers.

The dramatic almost-island on which the golf course is situated rises hundreds of feet above the water, with only dramatic cliffs separating the rolling hills from the sea. The classic links layout is simple but interesting and naturally there are spectacular views from every hole, especially the nine that play from atop the cliffs. The front nine is strong, but the back nine is where the challenging nature of the golf course really comes through.

Old head has been called ‘the Pebble Beach of Europe’ and is without question one the most spectacular settings for a golf course anywhere in the world.